The evidence continues to pile up that high-tech jobs are fueling Michigan’s economic rebound.

Take information technology consultancy Open Systems Technologies as an example. The Grand Rapids-based firm has added about 70 employees in 2012 and 2013, including staffing for a new office opened July 1 in downtown Detroit.

The company now employs 135 full-time workers and expects to hit $100 million in revenue this year, up from $5 million in 2003.

“I think we have seven or eight jobs posted right now on our website that we’re trying to fill,” said Mike Lomonaco, OST’s marketing director. “So far we’ve been really fortunate to find good talent here in the state, but we’ve been recruiting out of state to fulfill that need.”

Growth of high-tech firms like OST are among the key reasons why Michigan is expected to add 130,800 jobs in 2014 and 2015, according to a new economic forecast released by the University of Michigan. 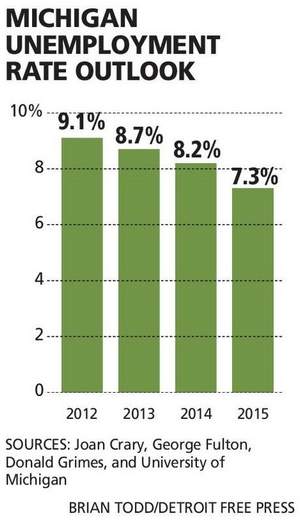 As gradual recovery continues, discouraged workers are starting to take a leap of faith, jumping back into the job market after years on the sidelines. That means the jobless rate won’t fall quickly.

The annual U-M forecast — conducted by economists Joan Crary, George Fulton and Don Grimes — suggests that the Michigan economy will achieve solid job growth in most major industries, including long-distressed sectors such as construction.

“This is a good news outlook for Michigan overall,” Fulton said in an interview. “If our forecast proves correct, that will be six years of recovery after the devastating downturn we faced in the first decade of the 2000s.”

The slow decline in the jobless rate, coupled with the new jobs, “suggests to me that people are seeing increasing job opportunities and deciding they’ll get back in the game,” Fulton said.

Despite steady growth in recent years, with the economy adding 218,900 jobs since January 2011 and projected job growth over the next two years, Michigan is still lagging behind its better years. By the end of 2015, the state will have recovered only about 48% of the more than 800,000 jobs it lost in the last decade, according to the forecast.

“Coming out of the Great Recession, the story on Michigan’s economy can be either upbeat, or not so much. It depends on your perspective,” the economists reported.

The domestic auto industry’s resurgence, the housing market’s recovery and encouraging signs in the services sector are driving the growth.

With projected annual U.S. auto sales of 16 million vehicles in 2014, the industry is still growing in Michigan, although the pace is slower than in recent years. Auto manufacturers are expected to add about 7,000 jobs over the next two years.

OST, for example, which also has an office in Ann Arbor, is benefiting from growth in the health care sector, which is scrambling to adopt electronic records systems to become compliant with new federal standards.

In an encouraging sign for many jobless workers, positions that don’t necessarily require a college degree are starting to recover. Trade, transportation and utilities — a category that includes retailers, trucking, warehousing and energy — are expected to add about 30,000 jobs.

And the economy is expected to add about 21,000 construction jobs in 2014 and 2015, an encouraging reflector of overall economic activity. The construction job growth comes as contractors are starting to build new homes again and homeowners are opening their wallets to invest in renovations.

Job losses in the government sector — which totaled about 82,000 from 2000 to 2012 — are tailing off. Government employers, including municipalities and public universities, are expected to remain relatively stable over the next two years.